CONCENTRATION CAMPS IN CUBA: THE UMAP 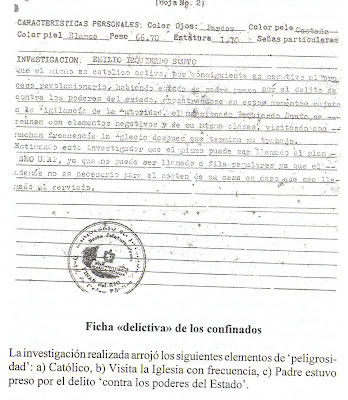 This corresponds to a "criminal profile" of Emilio Izquierdo according to the cuban regime. It explains why Izquierdo was sent to the UMAP camps. profile literally reads:
"This individual is a catholic and thus he is negative to the revolutionary process. His father was in prison for a crime against the power of the state. He is currently under police investigation as he is a friend of "negative elements" from his social class that visit him frequently after work. This investigator believes that this individual can be called to the 'Plan UMAP SMO' since he cannot serve the regular military service.”
Source: La UMAP: El Gulag Castrista 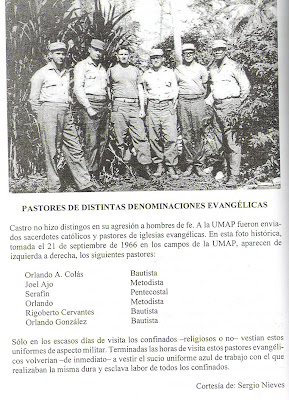 One of the thugs leading the UMAP camps was Commander Casillas seen in this picture (right)
Source: El Mundo, 1966


THE UMAP: CASTRO'S CONCENTRATION CAMPS
To eliminate and punish those deemed unfit for his revolution while using them for free labor, Fidel Castro presided over a closed-door meeting within the regime’s hierarchy. The resulting plan was to create a network of concentration camps to intern the thousands of "unfit." First it was named "Plan Fidel." But Castro, cunningly, wanted his name out of it. It was to be called UMAP (Military Units to Help Production).

Castro ordered that his agents - at night - go house to house to apprehend at gun point all the males that fit the profile of what he called, "the scum of society," for example: gays, Catholics, Jehovah’s Witnesses and members of other Protestant religions.

Castro's thugs went through every city, neighborhood and city block, arresting thousands of men (17 years old and up). The arrested were taken to police stations with the excuse of checking their personal ID cards – cards that all citizens of Castro's Cuba are required to carry.

At the police station, they were thrown into overcrowded cells and later taken to secret police facilities, movie houses, stadiums, warehouses, etc. In those detention centers they were photographed, fingerprinted and forced to sign under duress a confession declaring themselves the "scum of society," in exchange for their release. The ones who signed were released until they were summoned to the dreaded concentration camps. Those who refused to sign remained in jail and endured physical and psychological torture until they did sign.

The concentration camps were built in isolated areas of the province of Camagüey. They were like Hitler's camps, but without crematoriums. They have the electrified barbed wire fences, guards with machine guns and police dogs, etc. Something never seen before in Cuba's history.

Beginning in November 1965, people already classified were summoned to the camps. They arrived by train, bus, truck and other police and military vehicles. And so began the humiliation, suffering, torture and hard labor for those thousands of unfortunate men and boys. Many committed suicide while others died as a result of hunger and disease - with no medical attention - torture and execution. Many suffered solitary confinement, beating, rape and mutilation. The traumatized survivors remember that in the UMAP, "they never received humane treatment."

In July 1968 the name "UMAP" was erased from the camps. Castro's regime cosmetically transformed them into "Military Units." And all the paperwork associated with the UMAP was destroyed. New plans were created to continue confining young men discontent with Castro's communist revolution, selecting people for the same reasons as before. But this time they would receive a pitiful salary for their long and harsh working hours while living under very difficult and inhumane conditions – Castro’s lame attempt to satisfy international pressure.

This network of concentration/hard labor camps continues today as a way to repress and intimidate people, and to obtain cheap labor. Castro’s gulag network of camps and prisons is estimated at over 200 - before 1959, Cuba had just 4 prisons.

In a broadcast by the Cuban government’s Radio Progreso on March 6, 1997, sexology expert, Celestino Alvarez, officially recognized that the approximately 400,000 Cuban gays (according to Castro's regime) didn't have the same rights as heterosexual citizens. The broadcast did not go so far as to describe the government’s treatment of gays. A 1997 survey by the Communist Youth Organization in three Cuban provinces showed that gay discrimination was rampant.

Contrary to what many believe, gay persecution never ceased in Castro's Cuba. In September 1997, famous Spanish film director Pedro Almodovar, Swedish actress Bibi Andersson, French designer Jean Paul Gaultier and 40 other foreigners reported a raid on gays which took place at El Periquiton discotheque in Havana. All were videotaped by Cuban police. They were shocked by their experience as well as by the harsh treatment of Cuban gays involved in the incident.

The Castro regime’s flair for propaganda is very effective at giving a distorted view of reality to the gullible international community that flocks to his “paradise” with US dollars that keep him in power. For example, last year the regime held an international transvestite convention, while travel agencies in the US and elsewhere organize tours of Cuba, paradoxically, for gays.

The international community ignores those who died or suffered torture, mutilation and are still bearing deep psychological traumas as victims of Castro’s genocide plans. They blindly adore Castro as he parades through the world with impunity.
Source: Agustín Blázquez with the collaboration of Jaums Sutton
REVISTA GUARACABUYA
Posted by Totalitarian Images at 9:29 AM
Labels: military units for the aid of production, umap, unidades militares para la ayuda de la produccion en cuba