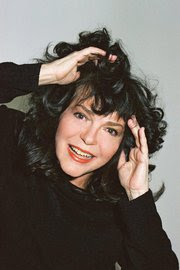 
The new music video version of the Piaf classic La Vie En Rose in French and Spanish was premiered at a sold out concert on December 11 at CUBAOCHO Art Center in Miami, Florida with the extraordinary singer Luisa Maria Güell.
Summary by an attendee: "The place was filed to capacity. People were turned away. It had a great beginning by the Negroni's Trio, a fast, jazz rendition of Gershwin's Summertime and another piece composed by them. Next was the magic of the music video La Vie En Rose starring Luisa Maria and produced and directed by Agustin Blazquez. It shinned with its own light--images filled with vibrant colors. Then the voice of the Diva emerging from this wonderful video with her masterful interpretation! Simply spectacular, followed by a roaring applause. From the dark materialized the awaited star to offer her talent and professionalism to her fans' delight. A full range of songs, from her early favorites to her greatest hits, songs also in French and English - including People accompanied by her guitar and a violin. A delirious applause! It left in me flying--an unforgettable night."
The music video of La Vie En Rose plus the new music video of another Piaf classic, Non, Je Ne Regrette Rien, in French, sung by Luisa Maria Güell can also be seen at www.YouTube.com/JAUMS
Miss Güell has been singing professionally since she was 5 year old and was a teen idol in Cuba and a singing star in Spain and Latin America with many television shows, concerts, records and CDs. In 1979 she was awarded the Edith Piaf Gold Medal in France. She was the first non French singer to receive this honor.
It was an privilege.(and a lot of fun) to work with Luisa Maria on these videos.  Please FORWARD to your friends.
Agustin Blazquez, producer/director
AB INDEPENDENT PRODUCTIONS
www.YouTube.com/JAUMS
ABIP.USA@verizon.net
Publicado por estudiosespiritistas.com en 18:25