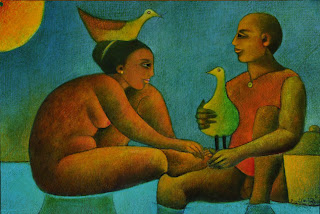 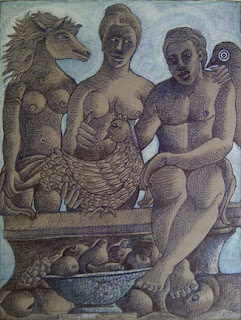 Omar d’Leon, “Ancestral Family” #04, Mixed ink on paper, 18”x24”, 2000
The Paul Mahder Gallery presents a rare exhibit by one of Nicaragua’s finest painters, Omar d’Leon along with new works by protégé, Andrea Yomtob. Reception will be held on Thursday, February 2, from 6 – 9pm.

Omar d’Leon is one of the most renowned painters and poets from Nicaragua in the last 50 years. D'Leon studied for nine years at the Escuela Nacional de Bellas Artes in Nicaragua under its director Rodrigo Penalba. His early inspirations were the frescoes of Pompeii, where he saw the use of cross-hatching and applied this technique to his love of the Impressionist school.

He founded a museum in Managua in 1970 named "Museum-Gallery 904". The museum's collection encompassed the arts of Nicaragua from pre-Hispanic to contemporary. In the earthquake of December 1972, D'Leon's museum and studio were partly destroyed and later ransacked, vandalized and robbed. After the Sandinistas took power in Nicaragua, he moved to Camarillo, California.

In 1982, one of his paintings was reproduced in the form of a UNICEF Stamp. His paintings are in many museum collections such as the Museum of Latin American Contemporary Art in Washington DC, the Ponce Museum of Art in Puerto Rico, the Museum of Latin American Art in Long Beach, the Chicago Art Institute and the Cuevas Museum in Mexico City. In 2011 the Ventura County Museum, CA exhibited a solo retrospective of his work.

“D'Leon's work is imbued with a mystical quality, one that knows abundance in paradise and the anguish of losing it, one that held the light of grace to find a way through fear and torture to be rewarded with pure vision and the ability to record it on canvas. He infused echoes of the frescoes in Pompeii and classical Grecian ideas of philosophy, community and beauty. He imprints European impressionistic painting imported to his country by his mentor with magical realism qualities that are essentially Nicaraguan.” Amy Jones

Omar d’Leon, now in his eighties, taught many students throughout the years. Andrea Yomtob, a graduate from the Art Center College of Design, has been his apprentice for the past 12 years. Andrea Yomtob is a gifted painter in the spirit and technique of Omar d’Leon and will be exhibiting alongside his works. 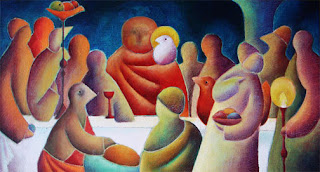